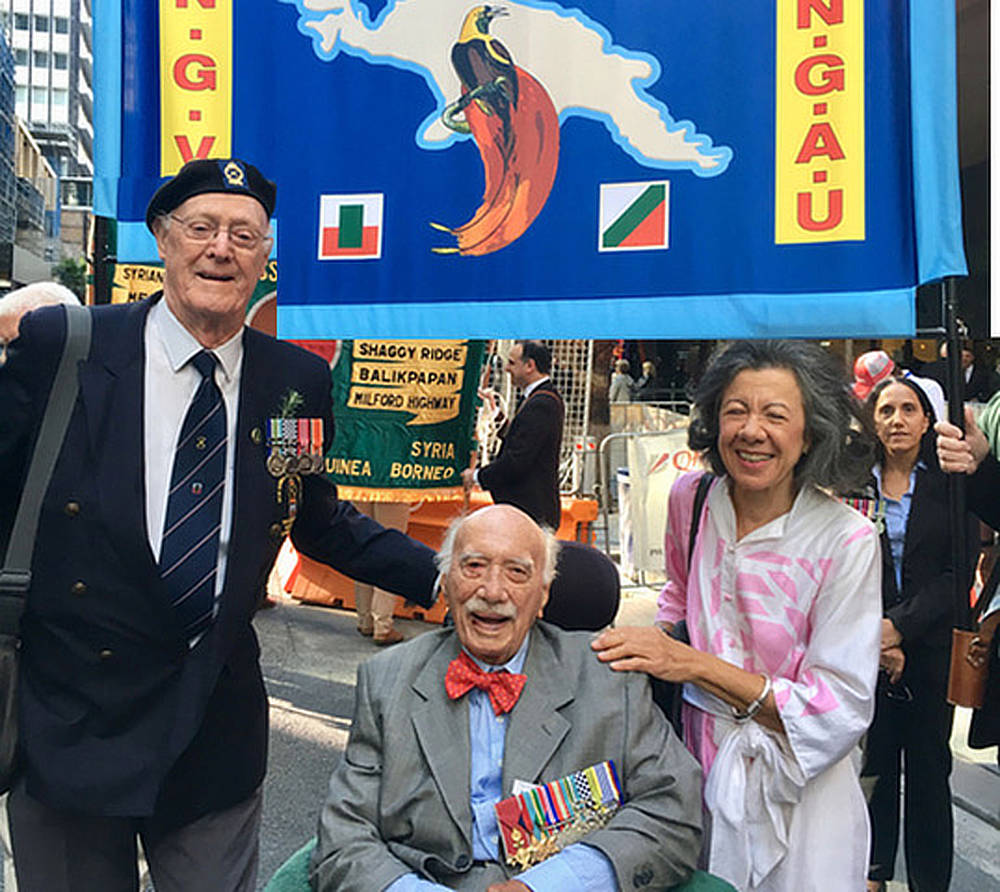 Frederick Peter Christian Kaad OBE, 100-years-old on 12 September 2020, is a revered beneficiary of The Mosman Anzac Memorial Hall Trust. Fred has been associated with the Mosman community and has been a member of the Mosman RSL Sub branch for almost 70 years. A distinguished Australian he has served in war and peace, and in the good times and the bad. He has experienced triumph and tragedy. And he has never failed or faded on this journey. We salute his wonderful achievements, his steadfastness and courage and his contribution to all our lives and to the lives of so many others.

Fred Kaad was always a leader and a competitor, traits he honed when representing Sydney Boys High in athletics, rowing and Rugby Union between 1937 and 1939. As an outstanding athlete, he broke long-standing records in sprinting, the broad jump and the 120-yard hurdles.

In 1940 Australia was at war against Germany and Italy. Kaad was keen to join the fray, but his parents refused to sign the papers that would allow him be posted overseas. Undeterred, Fred joined the Citizen Military Forces. On 4 August 1940, at the age of 19, he enlisted as N74666 Gunner Kaad, serving with the coastal artillery battery at Signal Head Fort near the entrance to Sydney Harbour.

In Australia at that time the war felt far away and perhaps, realising his athletics record and prowess as a Rugby Union winger, the top brass thought a Sydney-based Fred Kaad would be a valuable asset to help Army win the inter-service competitions against the Navy and the Air Force. But that was before the Japanese bombed Pearl Harbour on 7 December 1941 and the war began to rapidly move south towards Australia.

It was at about this time, in January 1942, that Papua New Guinea was drawn into the war when the Japanese invaded Rabaul. Later that year, on 8 December 1942, as NX89868, Private Kaad embarked on the troopship SS Taroona at Townsville bound for Port Moresby. He did not know it then but Fred’s long association with Papua New Guinea had begun. By the following month, the Japanese Army was well on the offensive, moving towards Port Moresby and attempting to capture the town of Wau.

Kaad and his unit flew to Wau as reinforcements for the 2/7th Infantry Battalion, their aircraft landing on the town’s notorious uphill airstrip which was under enemy small arms fire. The Japanese invaders were repulsed, and Australian troops won the Battle of Wau.

Then in June 1943, Kaad was unexpectedly transferred to the Australian New Guinea Administrative Unit (ANGAU) and promoted to warrant officer. Later in 1943, accompanied only by a small detachment of police, he conducted two solo patrols. in Papua’s Northern Division. His task was to restore the local people’s confidence in the Australian administration following the withdrawal of Japanese forces.

In 1944 Fred Kaad was attached to Cole Force, a small ANGAU group led by Captain Bob Cole MC supporting the 17th Australian Infantry Brigade as it advanced through the rugged Torricelli Mountains towards Maprik against stubborn Japanese resistance.  ANGAU’s task was “to locate and destroy enemy in the area; to obtain intelligence of enemy movements, to contact and rehabilitate the local people, and to recruit native labour.”

Fred Kaad was commissioned as a Lieutenant on 24 February 1945, and Cole Force was with the 17th Brigade when it captured Maprik at the end of April and chased the retreating Japanese forces into the hills around Ulupu and Yamil. The Japanese laid down their arms in Wewak on 13 September 1945

The war over, eventually the Army let Fred return to civilian life on 18 July 1946. Three weeks later, on 9 August, he became a Patrol Officer in the Papua New Guinea administration.

in February 1949 and was posted to New Ireland. When District Officer and famed Coastwatcher Jack Read DSC sent him to Taskul in New Hanover, he told Fred that the patrol post “would afford ample scope for one of your keenness and experience.”

On 21 January 1951, Fred had just returned from leave in Australia when Mount Lamington, never previously known to be a volcano, savagely exploded. The eruption killed more than 3,000 local people, 35 expatriates and caused a swathe of destruction to sweep through what is now Oro Province.

Kaad, familiar with the area and its people from his ANGAU days, volunteered to fly to Popondetta where an emergency operations centre was established. He was on the second flight to land there the day after the eruption. As Assistant District Officer in charge at Ilimo, Fred Kaad led a team engaged in rescue and rehabilitation. The success of the relief and recovery phase was later attributed to “the strong leadership provided by [Administrator] Colonel Murray, Dr Gunther, Ivan Champion and Fred Kaad.”

Fred returned to Australia in December 1951 to attend the two-year Diploma Course at Australian School of Pacific Administration down the road from Spit Junction at Middle Head. Kaad and his 25 compatriots, all ex-servicemen, had commenced their association with Mosman RSL.

After the ASOPA ‘long course’, Fred returned to the Territory in February 1954, this time to Goroka in the Eastern Highlands. It was here in 1955 that, quite unexpectedly, Fred became a film star. He, police Sergeant-Major Somu Sigob and Qantas pilot Dick Davis played cameo roles in Walk into Paradise, a movie filmed in English and French which, in passing, preserved a vital segment of New Guinea’s colonial history.

Walk into Paradise introduced worldwide movie audiences to a glimpse of Papua New Guinea, including basic kiap patrolling and spectacular footage filmed in the Asaro Valley where hundreds of traditionally festooned villagers beat drums and waved spears as they stamped and danced to flatten a newly constructed airfield. Released in 1956, the film was a box office success in Australia, France, the United Kingdom and the United States. Its Sepik River premiere, at Angoram in 1957, was in the world’s first paddle-in theatre – a flotilla of canoes parked side by side and end to end, floating on the river between two anchored schooners.

In 1959, Kaad attended the University of Queensland as a full time student, completing a Bachelor of Arts degree, and in May 1960, back in Papua New Guinea, Fred became the first person to have joined the Administration since the war to be promoted to District Commissioner.

Fred Kaad had just returned to the Territory and settled into a new appointment as District Commissioner, Madang, when disaster struck. On 3 September 1964, he was seated alongside pilot Ray Jaensch in the front seat of a Dornier aircraft that crashed on take-off at Tauta in the Ramu Valley. Jaensch did not survive, and Kaad suffered damage to his spinal cord, rendering him a paraplegic, and he received extensive burns to his legs.

He was medically evacuated to Sydney and spent six weeks in the Intensive Care Unit at Royal North Shore Hospital followed by nine months in the Spinal Injuries Unit. Never one to waste time, it was there he commenced a postgraduate Diploma in Educational Administration by correspondence, again through the University of Queensland.

He displayed more of that indomitable spirit on 30 March 1965 when his medical team allowed him to attend a seminar on New Guinea in Canberra. Fred concluded his presentation saying, “One day I will get back as a District Commissioner. I am like MacArthur. I shall return.”

After his discharge from hospital, the Papua New Guinea Administration seconded him to Sydney to lecture at the Australian School of Pacific Administration (ASOPA) at Middle Head. The association with Mosman RSL strengthened, hindered only by the restricted wheel-chair access at the time.

In 1972 Fred retired from Papua New Guinea service on medical grounds and was appointed as a lecturer and course director at ASOPA, completing his master’s degree by correspondence – graduating in 1973 as a Master of Educational Administration (Hons)

He continued as a lecturer and course director when ASOPA was transitioned into the International Training Institute (ITI) in 1973 – the year Australia granted self-government to Papua New Guinea. His students now came from the developing countries of the Pacific, Asia, Africa and the Caribbean as well as PNG.

Soon after leaving hospital, Fred was adding the challenges of the wider community to his endeavours. Among his other activities, he was International Commissioner representing PNG with the Scout Association of Australia (1966-1972); a Trustee of Airmen’s Memorial Foundation of PNG and a board member since its inception in 1969; a Member of Australia Council on New Guinea Affairs (1968-1975); Deputy Chair of the Organising Committee for the Far Eastern and South Pacific Games for the Disabled held in Sydney in 1974; and a director of the Paraplegic and Quadriplegic Association of NSW (ParaQuad) from 1966 and Vice President from 1975 to 1998.

Fred was also Pacific Area Consultant for the Commonwealth Council on Educational Administration (1976-1999); Chair of the Spinal Research Foundation (1991-2004) and a Director from 1977 to 1991; a member of the Committee of Management of Physical Disability Council of NSW (1994-1999); a director of the Spinesafe Education Program (now Youthsafe) (1995-1999); and a member of the Educational Advisory Committee for Spinal Injuries at the NSW College of Nursing.

In Mosman, he was a member of three of the Council’s Community Advisory Groups (1995-2009) and the Australian College of Education invited him to become a Fellow in 1980 and Life Member in 2002. He has been awarded life membership by the ParaQuad Association of NSW, the Papua New Guinea Association, Sydney High School Old Boys Union and he has received Rotary’s Shine on Award for outstanding support to other people with a disability.

That is a considerable array of success, commitment, and achievement, but 2000 may have been the standout year. The Governor-General awarded him the Australian Sports Medal and he was selected to be a Paralympic Games torchbearer. Fred Kaad thrilled the crowd when, instead of driving his wheelchair directly down Miller Street, North Sydney, as instructed, he made a complete circuit of the huge Victoria Cross intersection before passing the flame to the next bearer.

Fred Kaad has used his 100 years to the benefit of mankind. It has not been a century without personal hardship and tragedy, but it been a life of remarkable achievement and contribution. We thank him for being in our lives.