Introduction
At the end of WW1, like many other municipalities, returned servicemen and women together with the citizens of Mosman wanted to commemorate the sacrifices of those who had fought and died in The Great War. At a public meeting held on 20 December 1918 some speakers wanted an Anzac Memorial Hall, others a Cenotaph. So both were built.

The Memorial Hall
The Memorial Hall’s foundation stone at 801-803 Military Road (now 742 Military Road) was set by His Excellency The Right Honourable Lord Forster, Governor General on 23 April 1921 with another stone set by Lt Col John Hare-Phipps, President of the Mosman Sub branch of the RS&S Imperial League of Australia on the same day. The hall was officially opened in 1922 and dedicated by the Governor General on 24 May 1924. 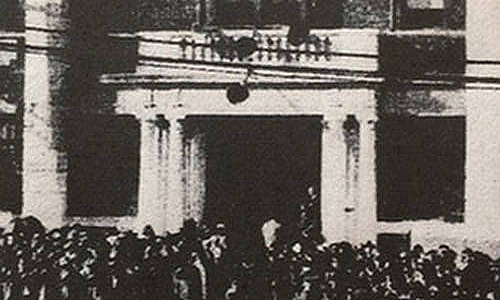 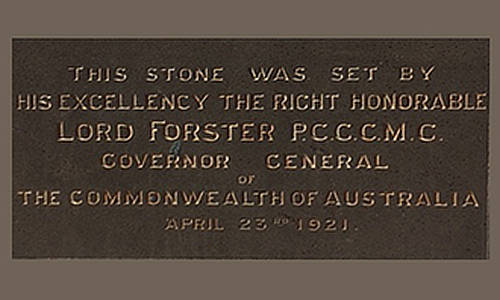 As recorded in the 21st May 1924 edition of the Sydney Morning Herald, “Entrance from Military Road to the memorial porch is by a flight of steps. The porch with its polished terrazzo floor and walls of marble has an imposing appearance. On the marble are engraved the names and regimental data of every known Mosman soldier who lost his life in the war. On either side of the porch are to be found roomy cloak and dressing rooms. The main hall is also reached from the porch.

The hall is 83 ft long and 38ft wide. The floor, which has been specially constructed for dancing purposes is of sanded jarrah. On each side of the hall are lounges 9ft wide for the use of dancers. In the main portion of the hall the latest pattern theatre chairs nicely upholstered have been installed for concert purposes. Under the main hall is a roomy supper room or second hall which is of the same dimensions as the main hall. A well appointed kitchen, with every convenience for catering, has also been provided. The first floor which is for use by returned soldiers, sailors and airmen of the Mosman branch of the Returned Sailors, Soldiers and Airmen’s Imperial League of Australia which received its charter in September 1918 includes a committee room, reading room, a billiard room with three tables” and a locker system which allows for storage of beer for each member since the hall has no licence to sell liquor.

The hall which cost 10,000 pounds to build, and with the land when finished was worth 15,000 pounds, was financed by public subscription and a loan from the Commonwealth Bank.

From 1928 until 1932, the Third Church of Christ, Scientist held services in the downstairs hall. At other times this area was known as the White Star Dance Hall. In the Depression year, 1930, many calls were made on its revenue. In 1933 however, a very energetic committee was formed, consisting of the Soldiers’ League, the Council, and the Citizens, and ultimately gained its objective, the freeing of the Hall from all financial burden in 1934. 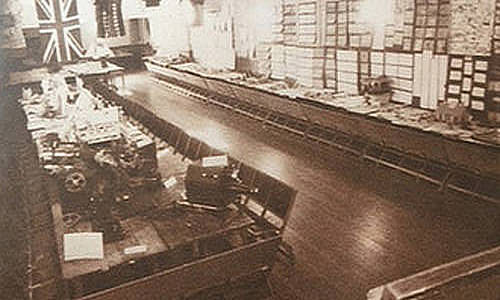 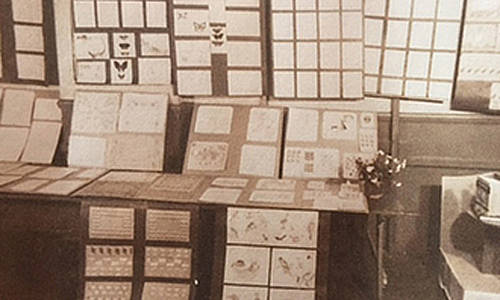 Other difficulties were the deaths of Trustees and Guarantors and the permanent succession of Executive ownership. It was found that a special Private Act of Parliament was necessary to remedy the latter. Hence, in 1938, a Private Act was introduced in the NSW Parliament, The Mosman Anzac Memorial Hall Act.

In 1975, The Mosman Returned Servicemen’s Club built new premises on the other side of Military Road and with the Mosman RSL Sub branch moved there in that year. The hall was leased to Jim Zemancheft and after making internal alterations to create small shop spaces Zemancheft opened Portobello Antique Centre. In 1991, as a result of continuing disrepair and maintenance costs the hall was sold to the fashion house Country Road, the facade was remodelled, iron door grilles installed and internal alterations were made, with proceeds of the sale used to update and refurbish the Returned Servicemen’s Club and provide a Welfare Assistance Programme for returned servicemen and women who enlisted in or reside in the Municipality of Mosman. 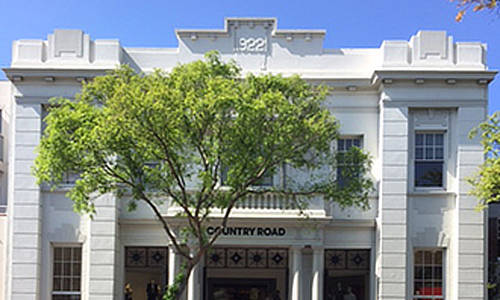 The Mosman War Memorial
As noted above, public subscriptions raised were also assigned to the construction of The War Memorial by Messrs Loveridge and Hudson Ltd to plans drawn by P A Kaad and W Stanton Cook. The Memorial, unveiled in 1925 by Sir Granville Ryrie, is a rectangular stone tower at the corner of Myahgah Road and Lennon Street (later The Crescent), inscribed with the names of 1141 men who had enlisted from Mosman’s pre war population of 15,980. Of that number, two hundred had made the supreme sacrifice. This was precisely the same percentage as the national ratio of “killed and died of wounds to enlistments” – 17 per cent. 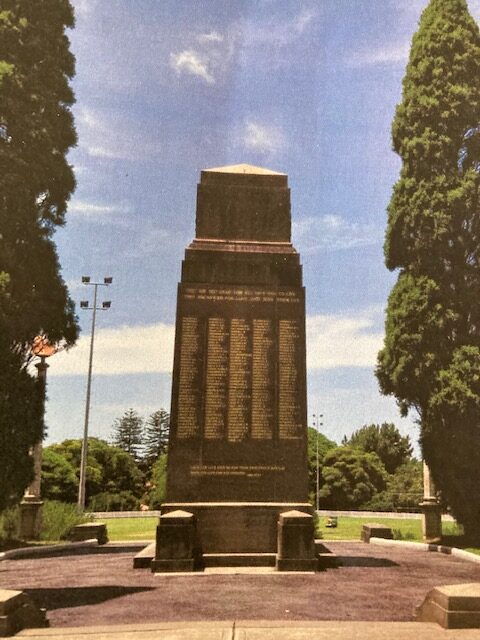 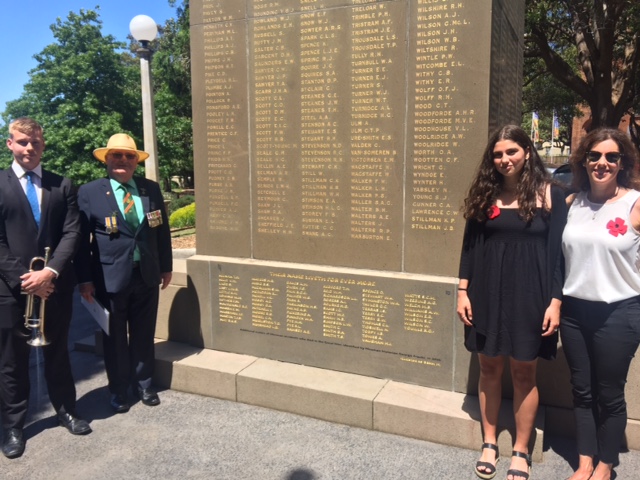 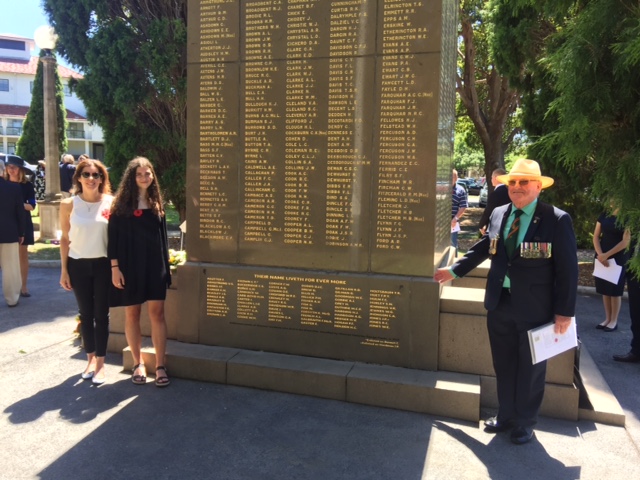 In 2010, Mosman historian, George Franki’s research disclosed another 133 names of Mosman’s WW1 dead not listed on The Memorial. In 2020, these names, in gold leaf, were added to The Memorial by The Trust, dedicated by Reverend Tim St Quentin and unveiled by Margarita Dowd at the Mosman Sub branch’s 2020 Remembrance Day Service (see Other Memorials and Commemorations below for Margarita’s story).

In 2010-11, The Trust, with Mosman Council, was a co contributor to the upgrading of the Mosman War Memorial to acknowledge all Wars and Conflicts including The Boer War, WW11, Korea, Malaya, Borneo, Vietnam, East Timor, Iraq and Afghanistan. The upgrade was officially opened on 17 April 2011 by Vietnam Veteran and Mosman resident on enlistment, Brigadier Adrian D’Hage, AM MC (R’td) and dedicated by Monseigneur Eugene Harley, also a Vietnam Veteran. (This upgrade ceremony can be viewed in the News Section of this website). 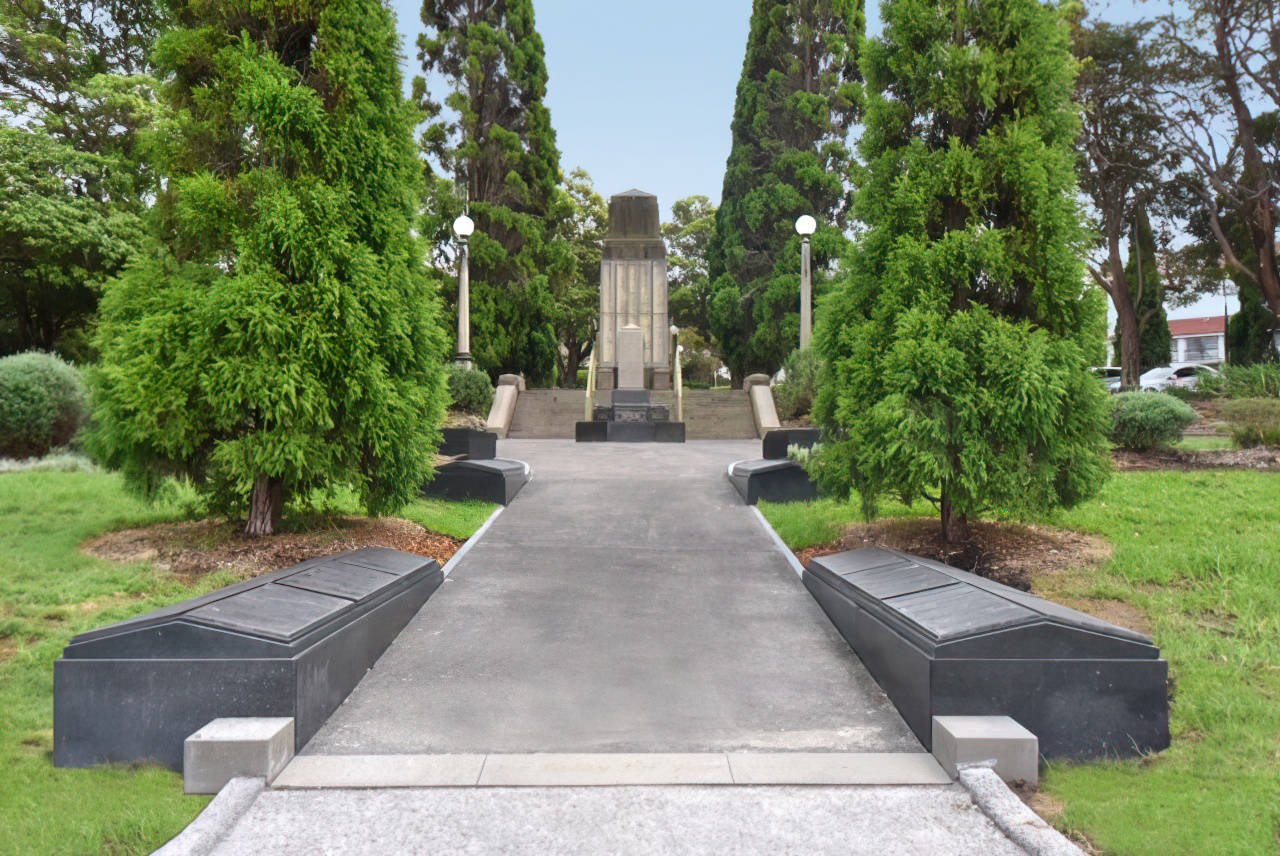 In December 2020, Mosman Council approved The Trust’s plans to place the names of 3497 Mosman residents at the time of their enlistment who served in WWII, Korea, Malaya and Vietnam on memorial plaques in this lower level of The Mosman War Memorial. These names were the result of 7 years of research by Lt Col (R’td) Graham Kells, MC and published in a book titled “We Gave Our Today For Your Tomorrow: Our Gift to The Citizens of Mosman from Mosman Residents as Time of Enlistment for Service in these conflicts”. The memorial plaques and the surrounding area, totally funded by The Trust and crafted by Stoneplus Pty Ltd, were officially opened in a commemorative address by Graham Kells and dedicated by Reverend Tim St Quentin as part of the Mosman RSL Sub branch Anzac Sunday service on 10 April, 2022.

Other Memorials and Commemorations
In 1998, a touch screen computer cabinet, containing the names and service records of Mosman resident enlistees who served overseas in WW1, was presented for display outside the Trust/Sub branch office which had been fitted out by DWD Interiors and officially opened by Mayor, Jim Reid. This display is the only one of it’s type other than one at The Australian Defence Academy(ADFA).

The Programme had been made available through the personal interest and effort of Professor Peter Dennis, Head of the History Faculty at ADFA.

In 2000, The Trust was the lead contributor to the restoration and upgrading of The HMAS Sydney Mast at Bradley’s Head, the unveiling being performed by the Prime Minister, the Right Honourable John Howard. 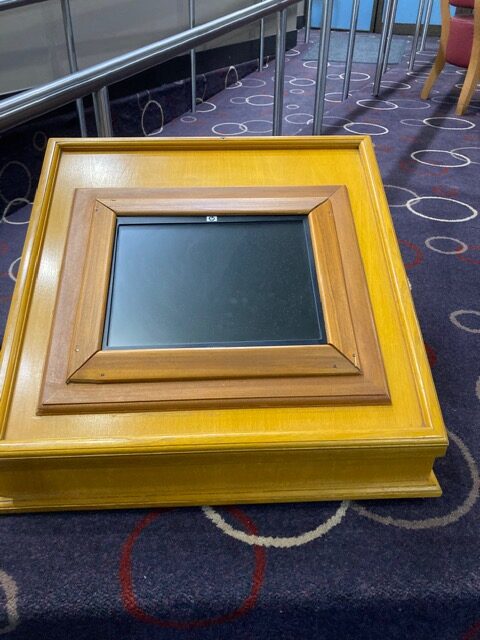 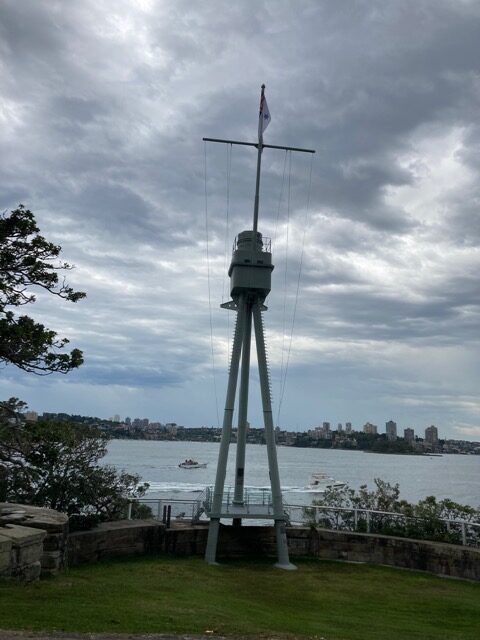 The Trust was also a significant contributor to the construction of the National Boer War Memorial in Anzac Parade, Canberra, ACT, officially opened by the Governor General of Australia, His Excellency, General Sir Peter Cosgrove AK AC CVO MC on 31 May 2017.

In 2018, to commemorate the centenary of The Armistice, The Trust introduced a literary competition ” Mosman Remembers The Western Front WW1 – 1918″ for high school students either resident in or schools located in Mosman. The theme of the competition was “Remembering World War 1 and the Mosman people at the time”. The winning entry prize was an all expenses paid (including airfares, accommodation, meals and ceremonies) Australian Battle field Tour, accompanied by parent or guardian, between 31 October – 13 November 2018. The winning entrant was Margarita Dowd, aged 13 from Mosman High School. Margarita’s submission was on David Samuel Anderson who lived at 21 Holt Avenue, Mosman and fell at the Battle of Fromelles on 19/20 July 1916, Australia’s greatest tragedy where there were 5,533 casualties from the 5th Division. Five other finalists each received the two volumes of David Cameron’s “Australians on the Western Front: 1918” published in 2018. The presentation ceremony was conducted at Mosman High School on 21 September 2018. Photos of this ceremony appear in the News Section of this website. On return home, Margarita prepared a report of the tour and addressed the Mosman Ex Service community. This presentation is also on the News Section of this website. Finalist’s submissions have been retained by The Trust for publication in media outlets. 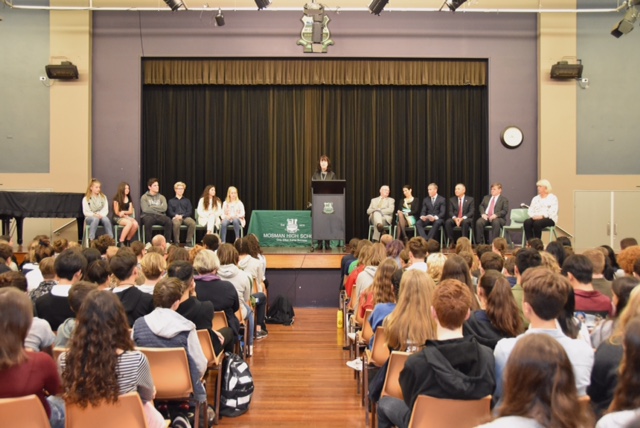 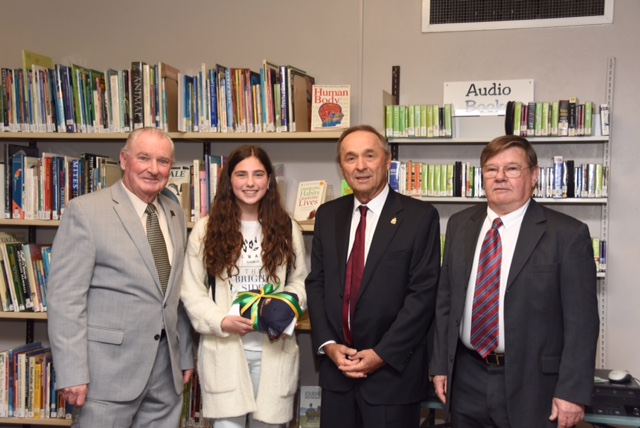 Mosman Veterans Aged Care Support
In 1998, a Deed of Agreement was signed with RSL Retirement Villages (now RSL LifeCare) by way of a $700,000 (increased to $1million in 2004) non refundable loan secured by mortgage and conditions to guarantee the provision of 10 beds at any one for time applicants nominated by The Trust for residential aged care, including dementia care. Additionally since 1998, The Trust donated direct funding of approximately $250,000 for specific aged care facilities and amenities. Unfortunately, a dispute relating to two breaches by RSL LifeCare of the terms and conditions of The Deed in late 2017 was settled in favour of The Trust resulting in the annulment of The Deed of Agreement thereby releasing funds back to The Trust for direct support of eligible applicants for residential and in home aged care through The Trust’s Welfare Assistance Programme (see the Welfare Programme Section of this website).